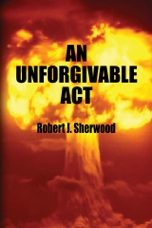 Hiroshima, 1945—a city incinerated by nuclear attack, and the forge that creates a beautiful psychopath named Mito Mitsui, bent on ultimate revenge against America. What is born in these ashes will change the world forever…

Baltimore, Maryland, present day—a simple supply problem for fighter planes escalates into a much more deadly threat—fueled by an obsession spanning more than five decades. A Japanese keiretsu, formed in vengeance, is driven toward lethal conflict with the United States by Mito Mitsui—Japan’s most beloved performer for over fifty years. What she demands is equal destruction, and she holds a blackmail card that can’t be trumped…

David Dawson is back in this thriller, caught in the dangerous dance of revenge—holding the fate of America and the world in the balance. What starts as a seemingly innocuous supply problem with a small but vital electronic component for a fighter plane soon reveals a much larger, and more dangerous, vulnerability. America relies on foreign companies for the production of sensitive technology—and one of those companies belongs to a Japanese keiretsu, a business conglomerate brought into being by the white hot hate of a woman damaged beyond redemption by the fatal attack on Hiroshima.

Mito Mitsui is his nemesis in this tale. Known publicly as Japan’s favorite entertainer, she is the last of a proud Samurai family destroyed by the nuclear attack on Japan in 1945, and has laid her plans for revenge over decades, carefully maneuvering and waiting for the right time to strike. She has nurtured and guided the businesses in the keiretsu to develop the technology and expertise that will entrap the country she hates. Her public persona has been the perfect cover for a life-long vendetta against the United States—and she has used her sex appeal, her brilliant mind, and her all consuming desire for revenge to orchestrate the ruin of the country who destroyed her family.

When America, as the world’s largest weapon’s producer, becomes reliant on Japan and Israel for sensitive guidance systems and global positioning software, she sees her opportunity. She ensures that the American weapons manufacturer is first dependant on Japanese technology, then launches a master stroke to paralyze America and bring the country to its knees. She threatens to manipulate GPS technology in every commercial transportation system, interrupting trade and creating horrific mass casualty catastrophes in the air and on the ground—with the backing of Russia, Israel and a handful of countries in the Middle East.

The American President is given a choice that is no choice at all—give in to her demands, and detonate a bomb over American soil, or allow her to destroy the country. It’s up to David Dawson and his small team to stop her, and to uncoil the bloody desire for vengeance before it is too late.

An Unforgivable Act is the fourth in a series of David Dawson thrillers, written by Robert J. Sherwood.