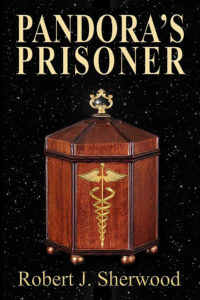 I started outlining Pandora’s Prisoner more than eight years ago.

The idea for the story came to me after I met a person who claimed to have healing capabilities. Since then, I have met several people who either have claimed to have been healed by alternative healing techniques or claim to have the skills to do so. Clearly there is a lot about the body and medicine that we do not know.

If you purchased one of my earlier books, you will note this story was referred to as The Healer, which was the original title. However, after running preliminary titles by about 20 different people, Pandora’s Prisoner survived as the most provocative. It also captures the theme of book which will hopefully unfold to you as you turn the pages, reading each one of course.  I used to tell the story to my five sons, wife, wife’s friends and frankly anyone else who would listen, enlarging the scope each time. They all encouraged me to make it my first book.

I am glad I did not take their advice. The story was too big to tackle in my early writing career. I learned a lot in writing more than 200,000 words in the first two novels and listening to feedback from my early reader’s club members. I have used everything I learned to pen this story. Many may still believe I was premature. I had a lot of suggestions to add the mayhem that characterized the early David Dawson adventures, but I stuck with the philosophical dialogue. It is more me than the ruthless killers from the black-ops genre. The story will not appeal to the car chase, blood and guts, vampire thrill seekers or conspiracy lovers — because it is a story about belief systems.

This story deserved a better story teller than me. However, I believe it is my best effort. It is certainly my most personal and to a degree the story challenges the underlying premise of the value of hope in a person’s life. I hope you agree.

As usual if you like the story, then the credit goes to my early readers and to all my life’s teachers. If not, then I assume all the responsibility. You will no doubt come across some story errors or even areas to which you strongly object to. Please keep an open mind and remember it is a story.